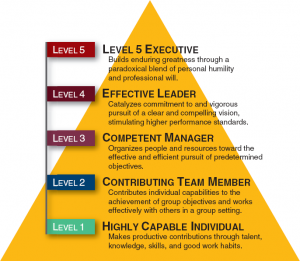 Jim Collins discovered when analyzing the research for his book “Good to Great,” that the leaders who ran the “great” companies during the transition from good-to-great were all “Level 5″ leaders. For those of you not familiar with “Good to Great,” the qualifying criteria was that a company had to have achieved an average cumulative stock return of at least 3 times the market over a 15 year period. Only 11 of the Fortune 500 companies met all the criteria they used.

Collins said that the “data won” when it came to understanding the forces behind all good to great companies. In other words, his findings were derived from hard data not from personal opinion or intuitions about what helped propel a company grow from good to great. “…Level 5 leadership is an empirical finding, not an ideological one.”

“The good-to-great executives were all cut from the same cloth. It didn’t matter whether the company was consumer or industrial, in crisis or steady state, offered services or products. It didn’t matter when the transition took place or how big the company. All the good-to-great companies had Level 5 leadership at the time of the transition. Furthermore, the absence of Level 5 leadership showed up as a consistent pattern in the comparison companies…”

In a nutshell, Level 5 Leaders “blend extreme personal humility with intense professional will.”

In a previous executive briefing (Charisma Is No Panacea), I wrote about my similar experiences and other research findings that show that the so called charismatic leader is more often than not a drag on a company “in the long run.” The operative words are “in the long run.” Extreme examples of the charismatic leader who implode include Martha Stewart and Lee Iacocca. In this and subsequent briefings, I will outline some steps you can take (challenging as they may be) to become a Level 5 leader.

First, let’s get the easy technical stuff out of the way. Level 5 leaders are all very bright people who know their business. They have the intellectual horsepower and domain knowledge to effectively manage their companies. That’s the easy part.

What separates them from the pack is their “personality attributes.” Who they are, not just what they know.

According to Collins there are five attributes that typify the Level 5 Leader:

So, how do you develop these attributes? Collins stated that it would “trivialize the concept” to give a 10-step list to Level 5. I won’t either, but I will outline some things you can work on. Space does not allow for me to discuss all aspects in this briefing… so look for follow-ups in later months.

First, all Level 5 leaders develop and groom successors. To do that means you have to be self confident enough to hire competent people (get the right people on the bus) and then delegate. The CEO’s primary job is to help develop and set strategy, develop and energize people and then keep them focused. Although lower level executives may not be setting strategy they do have to execute it and they have to use other people to do that. If you’re doing it most or all yourself, you’re an individual contributor… not a leader.

One problem I’ve observed with entrepreneurs, for example, is that they have a difficult time turning over the reins to others. I don’t think this is necessarily out of arrogance although it frequently is (refer to my previous briefing, “Turning Over The Reins: Why it’s hard to do”). Entrepreneurs tend to be creative doers… they just keep doing and creating because it’s in their genes. Furthermore, the incessant funding process requires that they repeatedly pitch their ideas to investors and being in the limelight can become habit forming and intoxicating for some. Charismatic entrepreneurs who are often bigger than life especially can cast large shadows (think Steve Jobs), making it difficult for others to be seen and to grow.

Level 5 Leaders exemplify the exact opposite characteristics that most entrepreneurs personify or what most VCs expect them to personify. They are “humble, quiet, reserved, shy, mild-mannered, self-effacing, understated, etc.” Can you imagine a mild-mannered, shy person successfully pitching their company to VCs who believe that CEOs should act like CEOs (meaning – charismatic).

Therefore, entrepreneurs and charismatic type executives have to consciously and deliberately think about delegating responsibility and stepping out of the limelight. Level 5 leaders naturally do this. That’s hard to do, however, if you are insecure and need attention to build yourself up. It’s also hard to do if you’re a doer (entrepreneur) or a problem solver and if you either don’t trust that your subordinates can do/think as well as you or you forget yourself (not self-reflective enough) and don’t rein in your impulses to problem solve too quickly.

The self-confidence that is the core of Level 5 leaders generally is something that is developed in early childhood. However, it’s been my experience that one can cultivate it even if you were not fortunate enough to have been born with it or had Level 5 parents (have I just coined a new parental descriptor?). First, it requires a willingness to be introspective and self-reflective and then to engage in what Collins calls “conscious personal development.” Most truly confident people have experience looking honestly at themselves, accepting themselves, warts and all, and then coming to terms with their imperfections. Sometimes self-reflection comes about through proactive means (e.g., psychotherapy or executive coaching) sometimes it happens through a significant life experience (e.g., heart attack, loss of a loved one, significant failure… yes, failure).

The trick isn’t to change who you fundamentally are but to accept who you are. If you do the latter you can begin to honestly understand your strengths and weaknesses which will allow you to effectively parlay your strengths and work around your weaknesses. Great leaders hire great people to make up for their weaknesses and to do the heavy lifting even for things that leader excels at.

In my twenties, I worked as a craftsman for a world renowned artist (James Hubbell) who knew about my interest in psychology. He told me that he would be reluctant to go into psychotherapy if the aim was to change who he was. He was afraid he would loose his creative spark… an understandable though unwarranted concern (in fact, psychotherapy often frees up individual’s creativity). James had come to terms with his idiosyncrasies and surrounded himself with people (e.g., craftsman and a good wife) who could do what he couldn’t or didn’t want to do.

Once you’ve come to terms with yourself you will naturally be more “humble and modest”, another set of Level 5 leadership characteristics. Level 5 leaders usually don’t write books like, “Trump: Surviving at the Top,” or “Iacocca: an Autobiography,” much less star in a TV program like “The Apprentice.” Names like Ken Iverson (Nucor) or Colman Mockler (Gillette) don’t exactly ring a bell of familiarity do they? Both were CEOs of two of the “Great” companies in Collin’s book.

There is a saying, “fake it until you make it.” Another way of saying that is if you want to be a Level 5 leader act like a Level 5 leader. You’ll get more comfortable with it as you become more competent and more successful. So, rein in your impulses to give “the answer” to your subordinates’ problems. Hire top people and delegate. Then, always give credit to your team for any successes. Be wary when you are approached by reporters who flatter you for your company’s (teams’) success. And… above all else, be accountable. Accept blame for failures but, give credit to others for successes.